15 Malaga sights in 1 day: a spring itinerary by car

If you're in Malaga for just one day, here's a guide to the best itinerary for you. You'll see all the main sights by car when you get around the city. 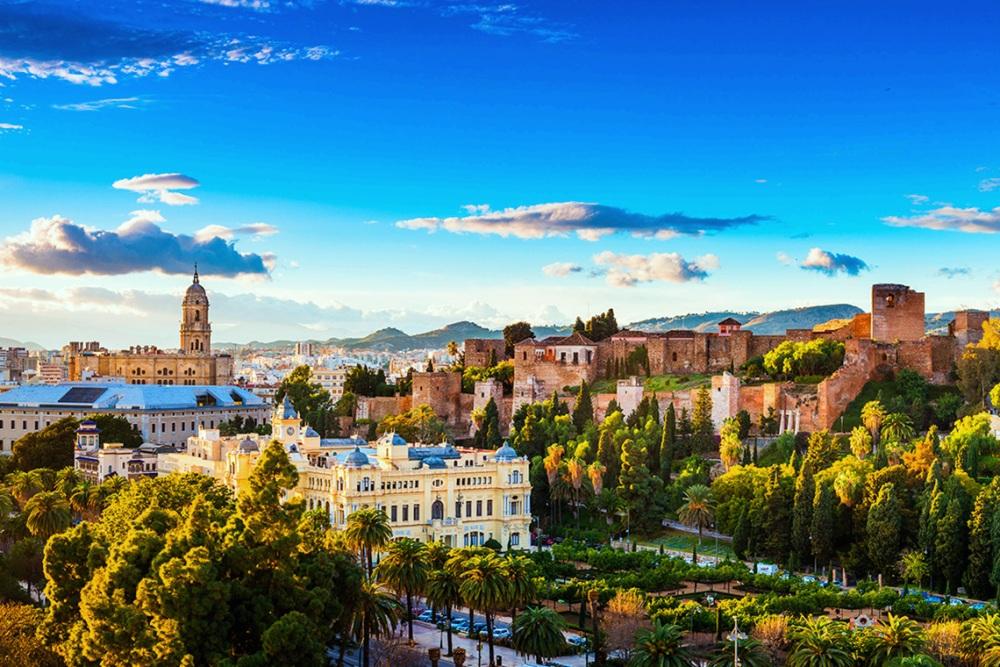 Malaga is a city with over 3,000 years of history. Pablo Picasso and Antonio Banderas were born here. The main interesting and significant sights can be found both in the historical centre and on the outskirts of the city. So everything can be comfortably explored in 1 day if you rent a car for the purpose.

So, let's walk through the central attractions of Malaga:

Let's start our walk on the central street of the city, Marqués de Larios street. The best designer shops can be found here.

From the square we will go westwards along Compañía street. Our first stop on the route is the Carmen Thyssen Museum (Museo Carmen Thyssen). The museum opened in the 16th century Palacio de Villalón in March 2011. In its permanent collection, 230 works from the private collection of the Baroness, mainly Andalusian painters of the 19th century.

Head back to Constitution Square to relax and enjoy a great coffee, sandwich or gyros at one of the cafes in the area

Refreshed, then let's move on. Head east along Santa María street, which will lead us to the Catedral de Malaga and its museum. Construction began as early as the Middle Ages (16th century) on the foundations of a mosque. Today we see the Malaga Cathedral in the Renaissance style. But the construction is not yet complete and the southern tower is missing. For this the church is popularly nicknamed "La Manquita" (The one-armed lady).

In front of the cathedral stretches the Plaza del Obispo. Nearby stands the Bishop's Palace (1762) (Palacio Episcopal), a fine example of the Baroque architecture of Malaga. The Diocesan Museum of Sacred Art is housed in it.

On Císter street we reach Alcazabilla street. Our next stop is the Fortress of Malaga (Alcazaba de Malaga), an Arab fortification. It was built in the 8th century on the ruins of a Phoenician fortress, but the main construction took place between the 11th and 14th centuries.

Alcazaba is connected by a long passageway to the Castillo de Gibralfaro. This defensive system was considered the most powerful in Moorish Spain.

On the right-hand side of the Alcazaba there is a road which takes you uphill to Gibralfaro, from where you can enjoy a fine view of the town and the sea.

On Alcazabilla Street at the foot of the Alcazaba is the Roman Theatre (Teatro Romano de Malaga). It dates from the 1st century A.D. and was used until the 3rd century. Today it has been restored and has become the theatre's stage for the city. Entrance to the "auditorium" is free.

Take a break and sample a variety of local and international cuisine at one of the restaurants in the Old Town. Fried fish, gazpacho, Malaga salad ... and great Spanish wine.

It is now the Picasso House Museum and the headquarters of the Picasso Foundation (Fundación Picasso Museo Casa Natal). Of interest is the 1st floor with rooms where the interior has been preserved from the time when the Picasso family lived there. The Fundación museum contains paintings, lithographs, illustrated books, ceramics and photographs of Picasso and his family.

On San Agustín street, in the Palacio de Buenavista, you will find the second Picasso Museum (at Calle San Agustín 8). You will find more than 200 works by the artist, including paintings, sketches, sculptures, engravings and ceramics.

#10. Church of the Apostle Santiago

On Granada street, Malaga's oldest church, the Iglesia de Santiago Apostol, combines Gothic and Arabic styles. In this church Picasso was baptised in 1881. The church was built in 1487 on the site of an ancient mosque, of which the bricked-up entrance in Moorish style is preserved on the facade.

The Paseo del Parque (Park Alley) was built at the end of the 19th century and connects the old quarter with the eastern side of the city and the promenade. Here you can find such iconic buildings as the old post office in neo-Mauritanian style (1923), the rector's house of the University of Malaga, the neo-classical building of the Bank of Spain (1933-36) and the neo-Baroque Town Hall (1911-19).

After walking around the park you can reach the Arena La Malagueta by car by crossing the Paseo del Parque and turning onto Maestranza street. After about 100 metres you will see the Plaza de toros de La Malagueta, the bullring.

It was built in 1874 in the neo-mudejar style in the shape of an octagon. It was opened in 1876. The bullring has a diameter of 52 metres. There is a bullring museum named Antonio Ordonez in the building.

La Flora De Malaga, (1817), the symbol of the city of Malaga, is located on Paseo de la Flora. Take in breathtaking views of the seaport.

The first jetty (Muelle 1), today is a shopping and entertainment area. Here you can do your shopping and refresh yourself.

#15. The Palm Grove of Surprises

Complete your journey along the Second Quay (Muelle 2), transformed into the Palm Grove of Surprises (Palmeral de las Sorpresas). Pass by the marina, restaurants, cafés and the Alboranía Maritime Museum and finish your journey by relaxing on the beach. Our day trip through Malaga is complete.

We wish you a pleasant journey around Malaga with a rental car from RentlineCar!

RENT A CAR FOR 1 DAY IN MALAGA VIA RENTLINE CAR

📌 Free delivery to the Malaga Airport