Barcelona in two days: from Málaga by car

Barcelona with its wide cultural and leisure offer is one of the most visited and cosmopolitan cities in the world where there is always something to suit every taste. 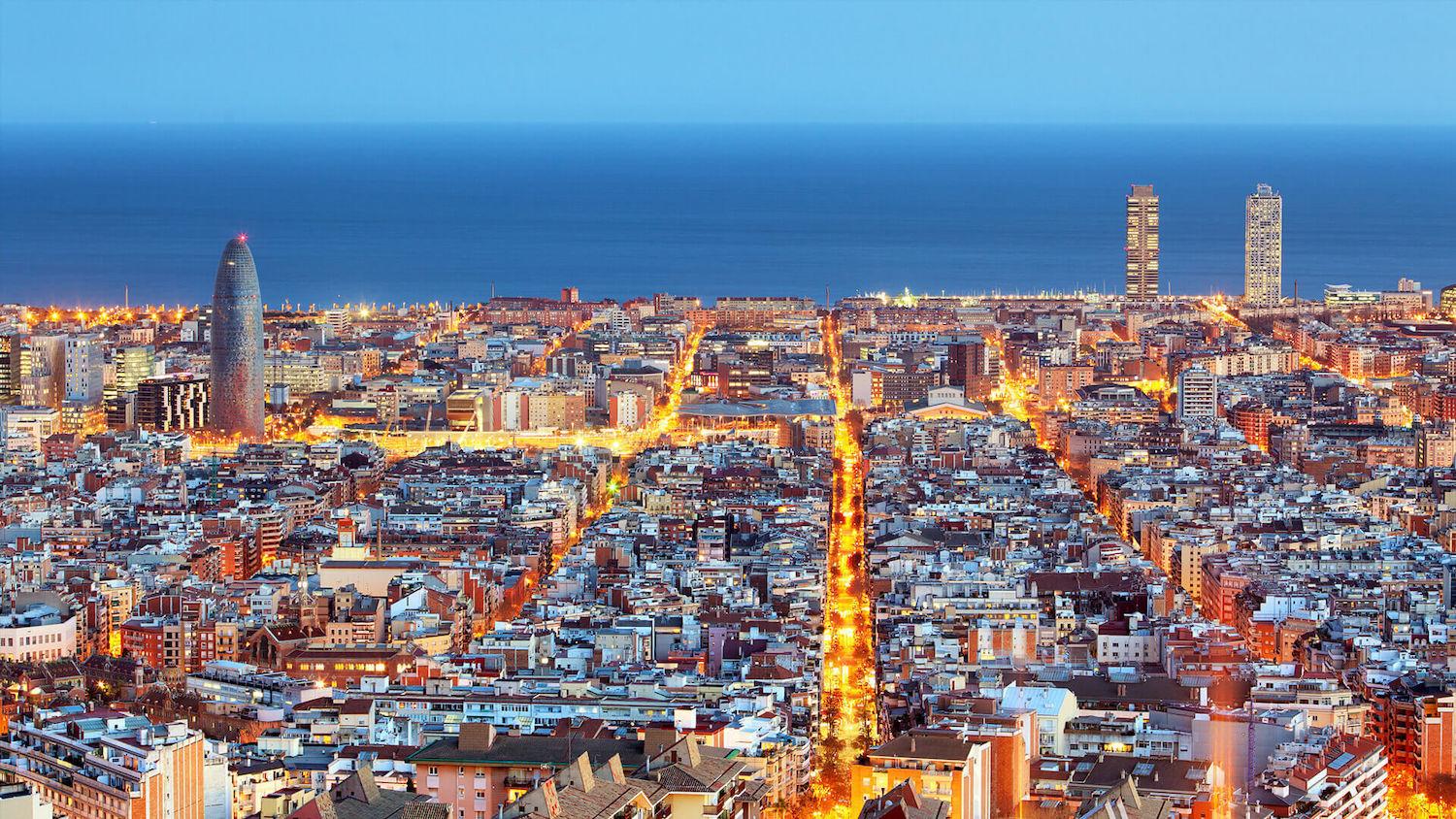 Spend a weekend in Barcelona, one of the most famous cities in the world!

Driving from Malaga to Barcelona:

Barcelona with its wide cultural and leisure offer is one of the most visited and cosmopolitan cities in the world where there is always something to suit every taste.

If this is your first weekend trip to Barcelona, you might want to check out the main attractions and get a taste of the atmosphere and come back for more in the future. Of course, two days is not long enough to get to know Barcelona, but give it a try.

On the first day, we'll visit the historic part of Barcelona and the maritime facade and enjoy views of the city from Montjuïc.

A stroll around the historic centre

Start your morning with breakfast in an area of Barcelona with a special magic, the Gothic Quarter. Full of traditional chocolate shops and confectioneries, the narrow streets recall the city's Roman and medieval past.

Worth a visit are the Plaza del Rey, the Cathedral, Sant Felipe Neri Church, the palaces housing the Generalitat and City Hall, and Santa Maria del Pi Church. Some corners will look truly fabulous, like the bridge over Via Bisbe that connects the Généralitat building and the Canons' House.

From here you can walk down the city's most famous street, La Rambla, which is 1200 metres long. This is a must-see for any visitor to Barcelona. You'll find terraces, street performers, flower stalls, and kiosks.

The walk also includes the Boquería market (where they hold Spanish cooking classes, amongst other things), Plaça Real and the Gran Teatre del Liceu. La Rambla walks up to the sea and there is the famous Columbus monument and observation deck where you can enjoy panoramic views of Barcelona.

A stroll along La Rambla takes you to the old port of the city, Port Vell. Continuing along the wooden promenade of the Mol de la Fusta, you'll see modern sculptures and yachts docked at the pier, before arriving at Barceloneta Beach.

Book a table at one of the local restaurants serving paella, fideua and seafood. Better still, find a seat on the terrace overlooking the sea. When the weather is fine, and you're up for it, you could even go for a swim.

If you have time before dinner and want to take in the marvellous views of the port and the city, the afternoon is tucked away on Mount Montjuïc. It's easily accessible by cable car and funicular from the Parallel metro station. At the top you'll find the Museo Nacional de Arte de Catalunya and the Joan Miró Foundation.

If you don't have much time, we suggest instead taking a short walk through the picturesque Citadel Park, called Barcelona's "green lungs".

If you're up on Montjuïc in the evening, take the opportunity to see the Magic Fountain, a stunning show starring light, music and water. It usually runs from 8pm to 10pm, depending on the time of year.

For dinner, we recommend choosing the stylish and charming neighbourhood of El Born, home to attractions such as the Picasso Museum and the Santa Maria del Mar Church. It is the ideal place to have dinner and a favourite drink.

What can I see in Barcelona on Day 1-st?

The second day in Barcelona we will explore the Art Nouveau architecture, and in particular the works of Antoni Gaudi.

Today we will start our walk in Plaça Catalunya. For breakfast, we suggest trying a typical pa amb tomaquet (bread rubbed with tomato) and then a 10-minute walk to Casa Batlló, located on Paseo de Gracia Avenue. Casa Mila, also called La Pedrera, is a little further along, on Provença Street.

Designed by Gaudí in the Art Nouveau style and recognised as a UNESCO World Heritage Site, the facades of these buildings are sure to catch your eye. If you have time, we recommend taking a tour of their interiors to appreciate the great architect's flight of fancy in creating incredible forms.

If you want to know more about the Art Nouveau style in Catalonia called Catalan Modernisme we suggest you sign up for the Barcelona Walking Tours Modernisme in the Barcelona Golden Quadrant. And since you're on Passeig de Gràcia, you can afford to go shopping, as this is where all the city's most exclusive boutiques are located.

It is advisable to buy your entrance ticket in advance to visit this UNESCO World Heritage Site. Also keep in mind that right in front of it is the stop of the blue tour bus route Barcelona Bus Turístic. This is a special moment of our trip because in front of us is a symbol of world architecture and Gaudi's most famous work.

Construction has been going on since 1882 and is still ongoing (completion scheduled for 2026), but you can already climb the original towers, which offer magnificent views of Barcelona. Interesting fact: Did you know that Gaudi, who was killed by a tram, was buried in this temple?

Lunch in the Gracia quarter and Park Guell

The same blue Bus Turístic tour bus route will take you to Park Guell. Before that, however, you can have lunch in the Gracia quarter, one of Barcelona's most charismatic.

Neighbourhood life is very much a neighbourhood, where people know each other and relate to each other. New designer boutiques and international restaurants have recently joined the city's long-running bars and restaurants.

In the afternoon, there's nothing better than a stroll through Gaudí's Park Güell, also a World Heritage Site. It's also the perfect place to watch the beautiful sunset. You'll want to take your picture on the dragon staircase and the hypostyle hall, with the panorama of the city in the distance. There are guided tours of the park in several languages. In 50 minutes they will tell you all the secrets.

If you like haute cuisine, you can end your trip in style by treating yourself to dinner at one of the most famous restaurants in the city. Lasarte, Moments, Caelis, Hofmann, Disfrutar, Cinc Sentits, Tickets, Via Veneto... There are many choices. Another option is to head to Port Vell to catch a whiff of the Mediterranean breeze and go to one of the restaurants in the Maremàgnum.

So if you have some more time (e.g. if you arrive on Friday evening and spend the whole weekend in the city), we recommend two other interesting places, a little away from the centre.

Our first suggestion is to take the funicular up Mount Tibidabo, where the amusement park is located. This is especially interesting if you are travelling with children. The second is to visit a lesser known but more original place, especially popular with young people: the bunkers of Carmel.

They are considered by many to be the best lookout point in Barcelona in spite of their distance from the centre. You can get there by buses V17, 24, 92, 114 or 119, and then take a 10-minute walk. Don't miss the chance to see the city lights come on at sunset!

And of course we haven't forgotten about football lovers. If you dream to visit the Camp Nou Stadium, owned by FC Barcelona, take the Camp Nou Experience. It includes the museum, the trophy room, the tunnel through which the players enter the pitch, the press room and much more.

What can I see in Barcelona on day 2-d?

CAR HIRE IN MALAGA, TORREMOLINOS TO VISIT Barcelona BY CAR