The cultural sites of Seville that you should visit by car. You can start your journey directly from Malaga Airport to Seville 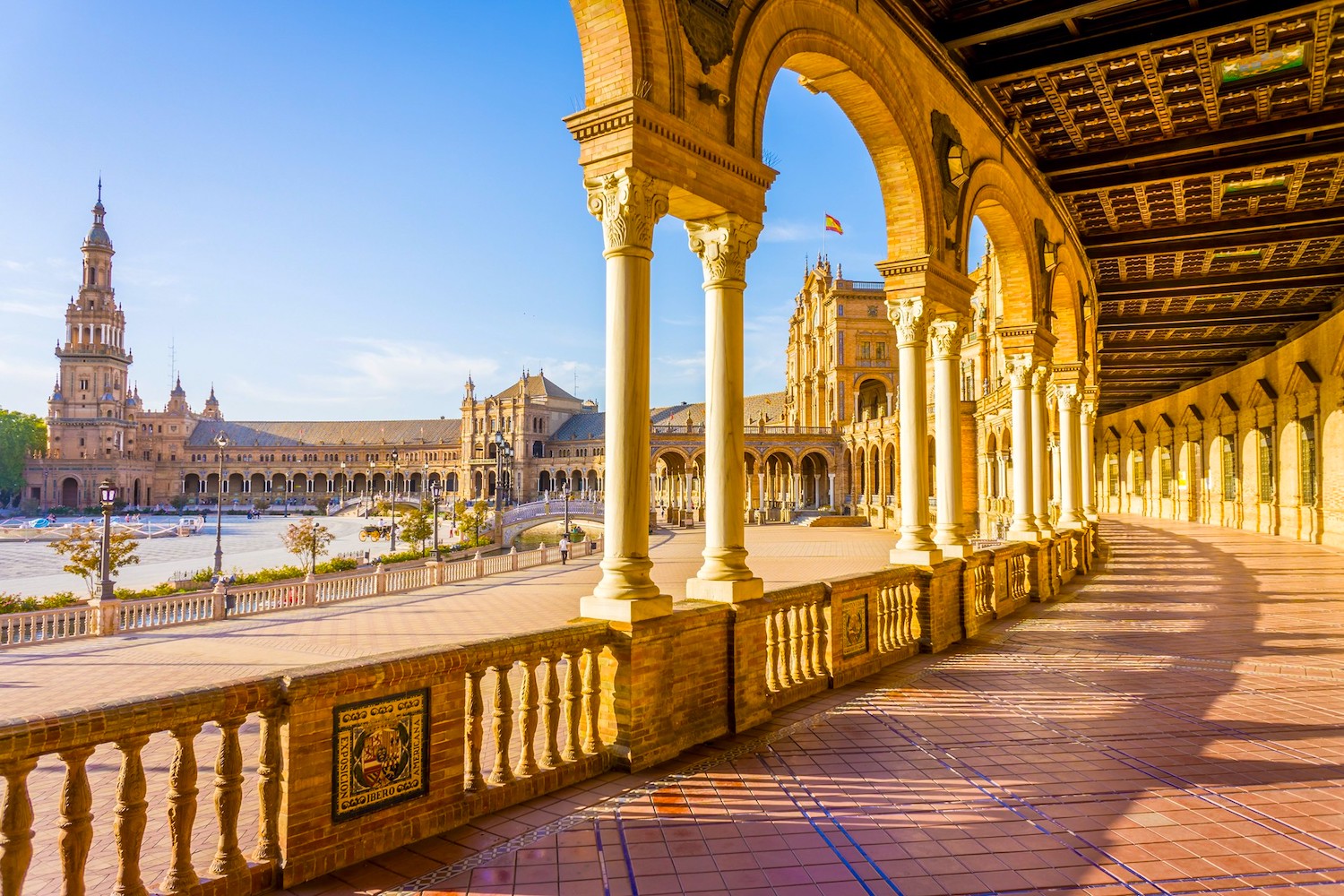 To Seville by Car

Drive a Rentline Car from Malaga to Seville! Traveling by car in Seville is a great way to discover the artistic and architectural heritage of the region:

Discover the journey along the mountain roads, the numerous and impressive natural landscapes of Andalusia and the surrounding regions of Spain! You can start your journey directly from Malaga Airport to Seville - we will customize the right car for your individual order.

Interesting routes and ideas for traveling in Seville

Seville is one of the oldest and most beautiful cities in Spain. Traveling through such picturesque lands gives pleasure, but it is most convenient to view the picturesque areas from the comfortable interior of the car. This is a wonderful place with historical sites. The town is the capital of the Spanish province of Andalusia, in which every tourist will find something interesting and memorable. He definitely will not leave anyone indifferent. You can walk along the narrow streets of the old city, get on a unique festival or a local holiday and be imbued with the history and traditions of the country.

After you enjoy the charm of the Andalusian city of Seville, you can go north of Seville to the natural biosphere reserve — Sierra Norte de Seville Park. It was declared a natural park in 1989 and is part of the Sierra Morena. Sierra Norte de Sevilla is an ideal park for hiking and cycling. Here is a network of pedestrian and bike paths with viewing platforms where you can enjoy unique natural landscapes.

Cerro del Hierro is a magical enclave in the province of Seville and a unique natural attraction which is an unusual rock formation. The unusual appearance of Cerro del Hierro is the result of erosion of limestone and is extremely popular among climbers. Although many prefer to visit this park just to admire the beautiful views that its natural landscape can offer.

In the same park you will also find several examples of archaeological remains such as an ancient settlement, several ancient cemeteries and the so-called Cueva de los Covacos - a cave with prehistoric drawings inside.

With Rentline Car you can arrange a car trip south of Seville and visit another famous biosphere reserve - Doñana National Park. The park was recognised by UNESCO as a World Heritage Site in 1994.

The great natural value of this park lies in the huge number of ecosystems and species that it contains. This natural area has the greatest biodiversity in Europe and is well known for its vast swamps, attracting many birds every year. It is also the preferred habitat of many endangered animal species, such as the Iberian lynx and the imperial eagle.

These are just a few examples of historical routes that come together in the delightful and mind-blowing Andalusian region. Thanks to Rentline Сar, you can comfortably explore the entire province by car, which we will select for you according to your preferences. See more: Rent a car in Malaga.

The cultural sites of Seville that you should visit by car

Often, tourists go to Spain for the Easter week to clearly see the festive night processions. Men wear platforms with ancient figures, it is important that each region has its own characteristics, because they compete with each other. A procession, taking place in a festive atmosphere, follows a crowd of believers.

More travelers are going to look at the unusual costumes of pilgrims. They attract their mysterious and mystical appearance. These are cloaks with pointed hoods. Traditional Spanish dresses differ in their colors and brightness. They can be seen quite often at various festivals.

The Giralda Tower is the remains of an ancient mosque, which was finally built in the XVI century, and its height is more than 200 meters. You can climb to the top and enjoy the beautiful views of the surrounding area, above there are several observation platforms open to visitors. There is a legend that in the Middle Ages the beauty and grandeur of the tower saved the Muslims who lived in the town from death. This landmark did not pass by any visitor.

The cathedral was built on the ground of a mosque, which collapsed because of an earthquake

It is one of the greatest cathedrals in the world. He impresses with his greatness and interior interior, in which there are many paintings, altars, etc. A separate place to visit can be the inner courtyard of the temple, in which there is a huge amount of orange trees. The famous Spanish architect Alonso Martinez designed the building. It lasted more than a hundred years, and the restoration and finishing work was completed only at the beginning of the last century. The ceiling height reaches 37 meters.

This castle is the most recognizable symbol of the state and the most striking landmark. The building was erected by the Moors at the beginning of the last millennium. It admires its decoration, its interior, its rich facade. In the courtyards of the castle, there are beautiful gardens that amaze with their decor and the variety of plants. The building has a rich and interesting history. In the multitude of rooms you can find a huge number of different statues, tapestries, paintings, statues of different eras.

The tobacco factory is not at all like a factory building

It is more like a higher educational institution, which it is now. This is the oldest structure in Europe. Tobacco in the country appeared at the end of the XV century from America and very quickly gained popularity, it was required more and more. Therefore, enterprises were needed that would process products and produce finished goods.

There were a lot of such enterprises, but at the beginning of the XVIII it became clear that production should be moved to the suburbs in order not to litter the city. It was then, in the 1920s, a factory was built, the goods on it were made by hand. The structure was re-qualified in an educational institution only in the 50s of the XX century. Prior to this, the equipment and working conditions were modernized, but still produced tobacco.

Architectural issues and design were handled by military engineers, since at that time there were simply no specialized masters. The building is very large in size and has the shape of a rectangle, decorated with all kinds of statues, monarchic symbols and more. Also preserved to this day are two patios in which you can spend your time and hide from the sun on a summer day.

This area is the oldest Jewish quarter. Walking around this area is like a journey into the past. Narrow labyrinths, old houses with wrought-iron bars on the windows and flowering gardens - all this can be found here and admire the aristocratic old days. All the magic of this region can be felt in the evening, after sunset, when cute little cafes are opened, lights are lit, shops with souvenirs are working and traditional concerts are held. For tourists, and for local people this is a fairy tale in reality.

The Golden Tower, like the Cathedral, is the most recognizable symbol of the country, although it is much smaller. The tower has many legends, it is in a very visible and passable place, and it is well preserved since the Moorish rule. At that time the purpose of creation was observation and military defense of the region. At the top was an observation post, on which people were on duty in turn. In different time epochs it was used for different purposes.

One of which was imprisonment. Later it was destroyed by an earthquake, but after two centuries it was restored and reconstructed. After that, the Maritime Museum was opened inside, which is open until now, meets wanderers and tells about the rich history of the region. The outer part is decorated with decorative ceramic tiles in the Moorish style, next to the river flows and wonderful plants grow. Here you can truly relax from the rhythm of the metropolis and enjoy the authenticity of the area.

Features of the region

For local residents and tourists this region will bring a lot of positive impressions and leave pleasant memories. The peculiarity of the region is that here they do not try to erase the history of capture by the Moors in the 8th century, but turned them into local culture and traditions.

There are many cultures interwoven here that can be seen and felt in one territory; each park is like a reserved area, which fits perfectly into the urban atmosphere, dilutes it and adds natural beauty.

Take a couple of days off for an amazing road trip and choose your car right now, pre-order it at the best price!